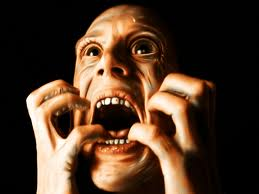 2 replies on “The Crucial Emotion of Horror”

Agreed with all of your points. Horror lives in the emotion of fear and absolutely the reader must make a connection to the MC so that the threat becomes ‘real’ to her. My only suggestion is that before you can scare your reader through your character, you have to make an emotional connection between them.. the reader should be invested into the character’s well being. If the reader doesn’t care about the character, the ‘effect’ won’t be nearly as engaging. Take for example the Star Wars I character Anakin Skywalker (boy). The movie fails completely in giving us an emotional connection to this boy who works in a junk yard and is talented with machines. So, when he is in the race, which should have been much more thrilling than it was for the viewer, we are detached, not really caring if Anakin wins, loses, crashes, dies, burns or decides not to race.

All the special effects and emotional descriptions are not going to be half as effective to the reader, no matter how skillfully employed, if the reader isn’t emotionally invested in the character experiencing them. Which is also why we don’t use secondary characters much for these descriptions either.

Thanks for the article.. it was well done, and clarifying.

Thanks, Glenn. Glad it was helpful.