Justin Bienvenue considers himself to be an author and poet. He lives in the New England area and became interested in writing in 2005 but has been writing on a more professional level since 2010. He says, “I mainly write horror and poetry although I’ve also written westerns and a crime thriller, so I try writing in other genres as well.”

Tell us about your latest project, Justin.

My latest novel is a gothic horror called THE WAX FACTORY, which is due out on May 31, 2019. It’s about a group of college students who, as part of a school project, go to an old factory for a tour. Along the way they realize this isn’t a normal tour, and the deeper into the factory they go, the more sinister and dark things become. Soon they are fighting for their lives and the project doesn’t seem to matter anymore. It’s the first part of a three-book series. 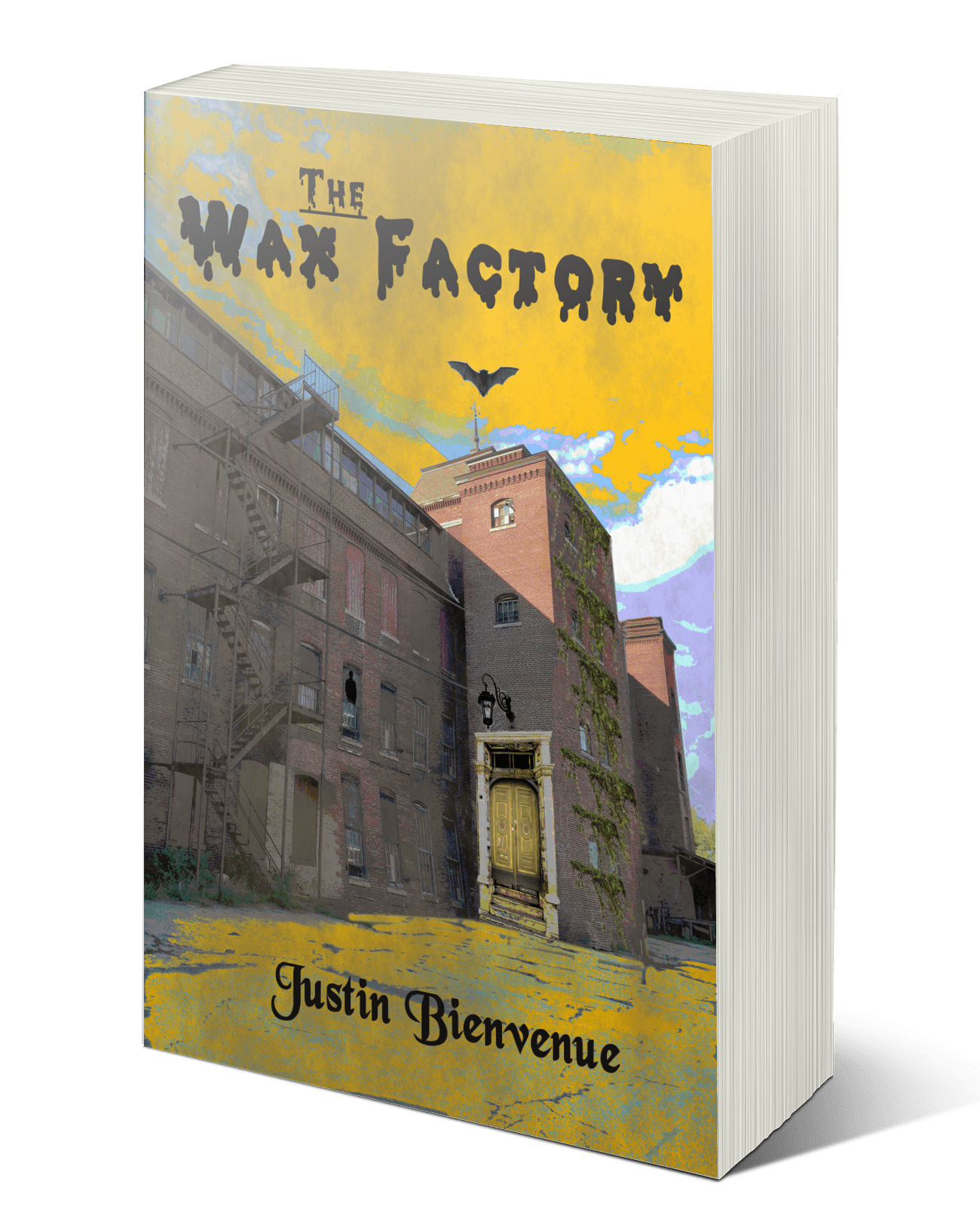 I have five other published novels that are all published and available on Amazon. There are my two horror poetry books, THE MACABRE MASTERPIECE and THE MACABRE MASTERPIECE: REPRESSED CARNAGE. I’ve also written another poetry book, LIKE A BOX OF CHOCOLATES and then a western horror, A BLOODY BLOODY MESS in the Wild Wild West and a crime thriller, OPIUM WARFARE. I’ve also written short stories and poems in over fifteen anthologies.

What is your writing schedule like? Do you write every day?

My writing schedule is pretty wide open, and I can write anytime I want. I try to write every day whether it’s a story, poem, or just a blog post, but sometimes I admit I become too lazy or end up doing other things. When I do write, I want to make it count, so when I write I devote all my time to whatever piece I’m working on.

I read a lot of Shakespeare in high school, and while the rest of the class seemed bored and uninterested, I was intrigued. Shakespeare is one of those people who you either love or hate. Some of his works really spoke to me and still resonate with me today. He practically had his own language and his works really speak to people and have a lot of power, so since I started reading Shakespeare, it was then I learned early on that language had power.

People believe that being a published author is glamorous. Is that true for you?

Yes and no. I’m not famous; people don’t come up to me on the street asking for an autograph, and I’m not a bestselling author, but when I tell people I’m an author or that I have published books, they seemed pretty surprised. In some ways it is glamorous because I get to do what I enjoy, what I love, and being an indie author gives me one hundred percent creative control, and it’s all me. So being published is even more of a great feeling. At times it isn’t all it’s cracked up to be, as I’m still trying to make it, but glamorous is a good word because at times it feels totally like that.

Literary success to me is partly what I wrote above. It’s becoming a best-selling author, having people recognize you and it’s making a lot of money off your books and having a big fan base that love you and your work. Do I think I’ll attain it? I want to but do I think I will? Well never say never but I’ll just keep doing what it is I love and do best, writing and if that type of success happens? Great, if not then I can always keep hoping.

To be honest not really. I may write but I’m not much of a reader. When I started writing and became a published author I found a new appreciation for reading but it’s died down as of late and I haven’t read many of the classics or beloved fiction that most people swear by. Perhaps I will come across such a book when I decide to read, but so far, no.

I don’t think I’ve had any scene that was hard to write. I write whatever pops into my head. I map and plan it out before writing or write on the spot, and if I feel it’s unworthy, I delete it. I guess fight scenes at times have been hard to write just because it’s hard to really use the right words to explain what’s happening without it sounding like a fight in the 1960’s Batman TV show. I want to be describing the right things but I don’t want to use lackluster words or go over the top with it, so fight scenes are hard and challenging at times. Also love and sex scenes just because that’s not my type of genre, so that would be hard to write if I actually wrote such things.

Yes, they are very supportive of my career. My mother enjoys all my work although it may be because she’s my mother and not just because she liked horror. They know I work hard and I’m really trying, and they know how creative I am, so they are supportive and hope the best for me.

My detail in describing things and my dialogue. I wouldn’t say I was bad at dialogue but it wasn’t my strong suit. I feel I’ve improved on that aspect and am getting better the more I write. Also describing things. I had a tendency in the past to either not write about something enough or too much, so now I have found a good balance.

If given the opportunity to do it all over again, would you change anything in your books?

I can change anything in my books right now if I wanted to and nobody would really know unless I told them. I stick by what’s already been written and I believe in it and believe my audience will enjoy it. I’ve thought about changing small things, but that’s my own little issue. I’m proud of the work I have written and put out there.

The marketing that comes after! Lol. Don’t get me wrong, writing has its issues such as sticking with the topic you want to write about, writer’s block, but the thing nobody tells you is that you have to market your book after. Not only did you write it, but now you have to get people to see that your writing is good enough for them. I would also say I have an issue with commas that I’m really trying to fix.

Planning what I’m going to write; the basics seem to come easy to me. By this I mean I have an idea in mind and I get started right away and for the most part I’m able to think and create without experiencing the dreaded writer’s block. Creativity and inspiration in writing come easy to me.

As I said I don’t read much but when I do read, I have my favorite authors like everyone else. I like Edgar Allan Poe, Rod Serling, Elmore Leonard, David Haynes, Vincent Hobbes, and Bettina Melher.