Zachary Ashford was born in England but now makes Australia his home. He grew up in the Brisbane area and still lives there.

“I’m a teacher,” he says, “but in the past I’ve been a copywriter, sub-editor, and radio creative, so I’ve always had a background in writing.”

Ashford started to take writing seriously in 2018 and had a couple of stories published. “Most of what I’ve had published so far has been of the creature-feature variety. I’ve seen it called ‘splatter,’ but that’s not really a genre I’m super familiar with—I just like a good monster story that goes for the throat and splashes on the gore.” Indeed. 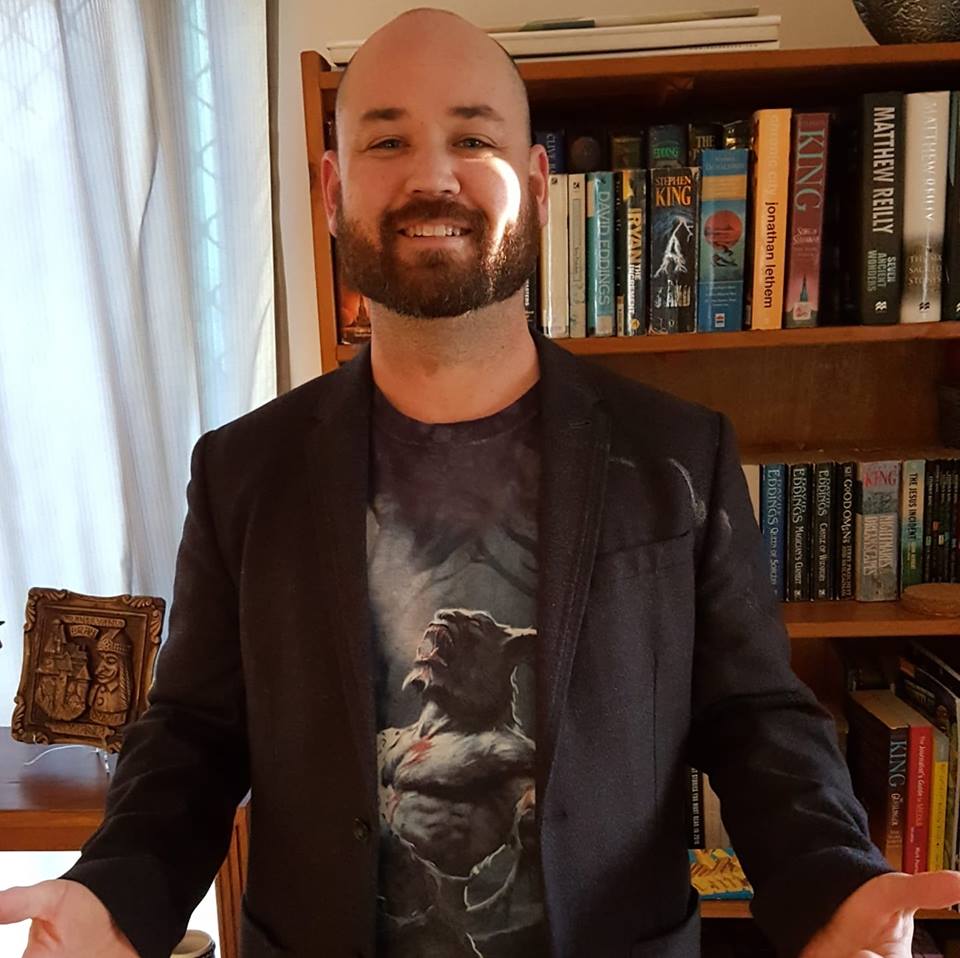 When did you first start writing? How did that develop to where you are now?

I guess like everyone, it started while I was in school. I always knew I wanted to write fiction but didn’t really do too much of it. I was a real procrastinator in that respect.

I studied a minor in creative writing at university and wrote a few small things, but it was more just something I always wanted to do. I had some ideas but never put them to paper until I decided I should actually apply myself and make it happen back in 2018.

The first story I wrote was “Blood Memory,” and that found its way into Dark Moon Digest. My first solo release was the Demain Publishing book The Encampment by the Gorge and Blood Memory.

Do you think someone could be a writer if they don’t feel emotions strongly?

Yeah, for sure. I think everyone experiences emotions differently, and the best stories are the ones that are full of empathy, but absolutely.

How important is research to you when writing a book or story?

It depends. Like everyone, I’ll flick for small bits of research, but I really just want most of what I do to be fun, and if a few truths get bent for the sake of moving the plot along, I’m not too fussed. Obviously, some things require research, but I certainly don’t invest hours—I just do a bit of reading, watch some YouTube videos, and move on.

Tell me about your writing style. How does it differ from other writers’?

I hope that it flies off the page. I’m a big fan of metal music, and I love trying to capture that same energy in my stories.

I think my two novellas (one coming out soon) and my upcoming Demain story are humorous, but I also like to think I have range. Some of what I’ve written has been quite serious in nature (even if it’s over the top).

What books have influenced your life the most?

Tough question. I’m a huge fan of Stephen King’s Dark Tower series. It’s probably my all-time favorite, but then I love The Old Man and the Sea, Frankenstein, Lord of the Flies.

Is your family or significant other supportive of your writing? If so, who’s the most supportive?

My wife is amazing. She’s very patient when I’m trying to pump out some work, and she’s always the first to tell me whether a story is any good or not. I think my kids think it’s pretty cool, but sometimes when I show them the books, they’re just like, “Oh, yeah.”

How do you see writing? As a hobby or a passion or a job?

I’d love it to be a job, but I have a pretty good career as a teacher—and that takes up a LOT of time. At the moment it’s a passion. I’ve been fortunate enough to have some books released, and they seem to have reviewed well. It’s got me on a couple of podcasts and things, but it certainly hasn’t made me any money! One day, I hope.

What is that one thing you think readers generally don’t know about your specific genre?

Oh, man, that’s hard. Horror fans are a pretty knowledgeable bunch. They’re like metalheads. They’re really passionate about their genre, and they know the history. I think most readers know all there is to know, especially if they read wider than Stephen King.

Is there any advice you would like to give to aspiring writers?

Just keep writing. Don’t self-reject. You have to back yourself and promote yourself. Others won’t do it for you.

At the moment I’m making some changes to a novella for a publisher who’s asked me to tweak some things for them. They’re a bit of a dream publisher, and they’re holding a slot for it, so hopefully I don’t screw it up.

After that, I’ve got a really cool idea for an alien sci-fi/horror that I’m gonna play with. I’m also 50,000 words into another novel that’s been kicking my arse for a while now. I’ll need to finish that up sooner rather than later as well.

As for releases, I have two coming up in the early months of this year—one for Demain and another novella for a rad publisher I’ve worked with before—that are yet to be announced.

You can learn more about Zachary Ashford at http://zacharyashford.com. Follow him on Twitter  @Ashford_Zachary. Peruse his Amazon author page at https://www.amazon.com.au/Zachary-Ashford/e/B087LV2SQP/.