I loved The X-Files. It’s one of my all-time favorite TV series and the best of the 1990s, in my opinion. It had sci-fi, fantasy, the paranormal, the weird, and horror. I not only wanted to believe, but I did believe. 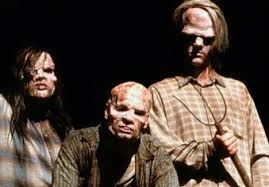 My hands-down favorite episode was the second in season 4, originally airing on FOX October 11, 1996. “Home” was controversial because it was so dark and violent. In fact, it was the only episode to carry a TV-MA rating during the series.

Mulder and Scully investigate the death of a baby born with severe physical defects. Traveling to the small isolated town of Home, Pennsylvania, the pair meet the Peacocks, a family of deformed farmers who have not left their house in a decade. Initially, Mulder suspects the brothers kidnapped and raped a woman to father the child, but the investigation uncovers a long history of incest…”

I’ll leave the rest for your viewing pleasure.

If you love horror, you’ll want to watch “Home” for yourself. This seminal episode is what inspired me to produce the horror/crime anthology Tales of Blood and Squalor at Dark Cloud Press. “If you were a mother, you’d understand…”