A Stir of Echoes is a 1999 supernatural thriller directed by David Koepp. It’s based on one of my favorite Richard Matheson novels (in fact, one of my all-time favorite novels). In the film, protagonist Tom Witzky is hypnotized by his sister-in-law, who gives him the post-hypnotic suggestion: “Your mind will be completely open, like an open door, open to receive everything around you.” This suggestion turns out to be way too open-ended. 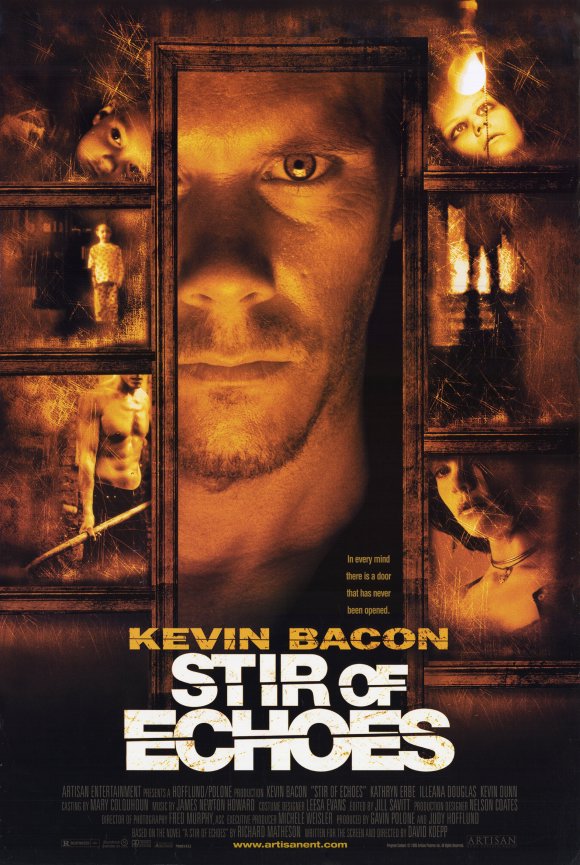 In one scene, Tom switches on a baby monitor at his son Jake’s bedside. This is a metaphor for being open and tuned into activity “upstairs,” or on “the other side.” Tom’s psychic abilities have been switched on artificially. But his son comes by them naturally.

Jake “shines” like Danny Torrance in Stephen King’s The Shining. In fact, one scene in which Jake and his mother wander into a cemetery during a police officer’s funeral, Neil the cop follows them and discusses Jake’s psychic abilities much like Dick Hallorann in King’s 1977 novel. I can’t recall if the cemetery scene is derived from Matheson’s 1958 novel, but if it is, Matheson’s version is the original. Like Hallorann, Neil says of Jake, “Boy’s got the x-ray eyes. … Daddy?” Maggie affirms his perceptions.

Jake sees and knows things psychically and has an “imaginary friend,” Samantha—a departed spirit who haunts him because he can perceive her. This spirit relationship is like Danny Torrance’s “Tony,” who’s actually a mediumistic spirit guide. After Tom encounters a vision of Samantha, Jake tells him, “You’re awake now, Daddy. Don’t be afraid of it, Daddy.”

With another child on the way, Tom faces giving up his dream of becoming a rock star. Yet he laments that he doesn’t want to be ordinary. When Lisa hypnotizes him the second time, he receives the command to DIG. He’s not sure what it means, but he tears up the backyard and the house trying to follow through. When Maggie challenges him, he tells her, “This is the most important thing that’s ever happened to me. The most important thing I’ve ever done.”

His digging, searching for the truth, leads him to the answer he’s been seeking. It dovetails with the most important thing Samantha needs: justice for the crimes that caused her death.

This one’s got the supernatural, psychic and mediumistic abilities, and crime. My favorite combination. If you haven’t seen A Stir of Echoes, I highly recommend it. But be sure to read the book first!

Hi Lee-
In my post I discuss the difference between a child’s mind and an adult’s mind. Jake’s mind was naturally open. Tom had to be hypnotized and told to have an open mind in order for him to receive communications. And, it looks like after the mystery is solved, Tom is not receiving communications while Jake continues to receive them.