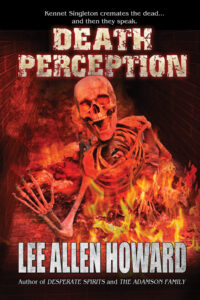 Kennet Singleton cremates the dead—and then they speak… “Avenge us!”

He thinks his ability is no big deal since his customers are already dead. But when his perception differs from what’s on the death certificate, he finds himself in the midst of murderers. To save the residents and avenge the dead, Kennet must bring the killers to justice.

“Dastardly devious, cleverly conceived, and just a whole lot of fun to read, Death Perception is Lee Allen Howard on fire and at his finest. Rife with winsome weirdness, it’s like the mutant stepchild of Carl Hiaasen and Stephen King, mixing a truly unique paranormal coming-of-age story with a quirky cast of offbeat noir characters into a novel that’s simply unforgettable… and hilariously original. A supernatural crime story, blazing with creative intrigue… don’t miss it.”
—Michael Arnzen, author of Play Dead

“Lee Allen Howard’s Death Perception is a red hot union of Gothic crime thriller and grim humor that burns with supernatural tension. Beneath the sickly sweet scent of caramelized sugar lies the wildly entertaining tale of a man who delivers justice to the dead while fanning the fires of the living. Ever hear the expression, ‘laughing in a morgue’? Death Perception feels just like that. Howard has a gift for crafting eccentric characters and clever plots. This is dark fun at its best.”
—Jason Jack Miller, author of The Devil and Preston Black and Hellbender

“Death Perception has officially made me envious of Lee Allen Howard. It sings like a choir of angels, yet weeps like a ghost in winter. Everyone should have this in their collection.”
—Trent Zelazny, author of To Sleep Gently and Butterfly Potion

“Part ghost story and part murder mystery, Howard’s clean prose and spot-on timing make for a compelling read. If you enjoy ghosts, revenge tales and mysteries this book is for you.”
—Jennifer Barnes, Managing Editor of Raw Dog Screaming Press

“Part crime novel, part supernatural thriller, part… funeral pyre ‘n smores (I kid you not), this is Howard at his very best—putting you in the front car of the roller coaster, careening you past memorable characters, jostling you through hairpin plot twists, and trying his darndest to scare the bejesus out of you while managing to satiate the most macabre of sweet tooths. …A really fun read!”
—Mike Mehalek, Writing is Tricky

“I was immediately intrigued by the premise, and it did not disappoint. It’s easy to get lost in the pages…”
—Jasmine

“Lee Allen Howard has seamlessly joined the characters in this book, and you find yourself hoping that good prevails and that Kennet doesn’t meet the same fate as some of the customers he cremates. I highly recommend this book to anybody who is looking for something a little bit different and offbeat. Lee Allen Howard is definitely going on my favourite author list!”
—Pinky Pollock

“Lee Allen Howard’s Death Perception is a novel in the likes of a mellow Stephen King.”
—Bruce J. Blanchard

“Outstanding! … Death Perception is a brilliant twist of the paranormal. It has everything a reader would desire, suspense, twists and turns galore. I urge you to read this one.”
—Sherry Bagley

“Death Perception by Lee Allen Howard is phenomenal. The marriage of the story line and Kennet, the main character is a perfect blend. I LOVE this book.”
—Malina Roos

“Lee Allen Howard is quickly becoming a huge favourite of mine. He crafts his characters so well and gives them depth, flaws and realism that you expect from a much more seasoned writer. … Death Perception is smart, funny, engaging, and endearing. A true work of art.”
—Malina Roos

“What I loved is Howard’s more-than-heroic hero. Kennet Singleton has had a rough life, and things just get worse due to some creepy people in the town—his greedy funeral director boss, the cold-hearted owner of the home care place where Kennet’s mother lives, and the half-stoned orderly who targets Kennet whenever possible. Howard does a masterful job peeling the layers in this deeply moving novel, revealing Kennet’s unusual gift of perception, plus the evil surrounding him. I cheered for Kennet every step of the way. A great, satisfying read.”
—Meg Mims, author of Double Crossing

“Lee Allen Howard has taken the supernatural to an uncanny place in his latest novel. Kennet Singleton has this weird gift of being able to divine the cause of someone’s death by toasting marshmallows over their cremains. He knows that they’re dead. He knows how they died. What he doesn’t know is why he’s able to do this and for what purpose. This is where the book gets really interesting. In Kennet’s small town, no one is who they seem to be. The suspicious personal care home owner, the dictatorial funeral home director and spirits from Kennet’s past—they all add up to one hell of a creepy story.”
—Christopher Miller

“This entertaining novel is a perfect young adult book… the spooky premise, the ill-used hero, the innocent youthful romance, the coming-of-age stuff, the clear-cut goodies and baddies, the ghosts, the marshmallows… and it’s got death and dead bodies! … a terrific read.”
—Anastasia

“This was a delight. Honestly. If you’re looking for a fun supernatural novel with a unique premise, give Death Perception a go.”
—Jasmine

“This was my first time reading Lee Allen Howard’s work and you can color me impressed. It is an uncommon book, and incorporates such fine-tuned pacing I finished it in four hours…”
—Nisar Masoom

“Was Death Perception weird? YES. Was it creepy? YES! Seriously, roasting marshmallows over ashes and then eating them is WEIRD and CREEPY!”
—Kameron

“Quite a surprising ending.”
—Priscilla

“Death Perception was a good read sending me back to the first time I read The Dead Zone.”
—Jodie Cook

“Like marshmallows roasted in crematoriums, this is a suspenseful-thrilling read with just the right amount of tension and humor to make it a sheer delight.”
—Tonja Drecker

“I thoroughly enjoyed this well written, engaging and intriguingly dark amalgamation of a ghost story and a murder mystery.”
—Graham Sillars

“The first pages sit with a wonderful mix of under-dog, creepy places, death, and a twist of quirky fun. And that’s a good start for the entire tale. The author masterfully weaves dark, harsh scenes with eyebrow raising humor to create let tension and suspense run high, while keeping it intriguing and just a bit fun.”
—Tonja Drecker

“If you’re looking for a book to kick off the spooky season, but you don’t want to dive too deeply into horror, give Death Perception a try.”
—Tabitha Tomala

“The novel is well written. Full of decent plot twists and well-built characterization. A brilliant story idea that is also brilliantly executed. This is a book I’d highly recommend.”
—Graham Sillars

“Death Perception is the second book I’ve read by Lee Allen Howard, and I have to admit, I’m becoming a bit of a fan of his stories.”
—Jasmine

“Kennet was an unforgettable character, and very, well I don’t want to say insane, but his perception of death is very different from others. I do like how the story unwinds, and [Howard] brings the story to life.”
—Amy Shannon

“I can’t say I’ve ever seen or read anything that even comes close to being along those same lines, so score one for uniqueness and creativity.”
—Jasmine

“Howard’s writing style was artful when he describes the settings and people within the book and he definitely has a talent with words that rivals some of the horror greats.”
—Jasper Emmett Haru