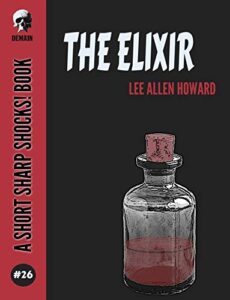 Pauly needs cash—NOW—for a fix. When he encounters Belia Demkakova, he negotiates to do yardwork for her. But the old woman has something that can erase his withdrawal symptoms. At a price. What will Pauly give to be free of his addiction? More than he bargained for!

Writing about “The Elixir,” author Lee Allen Howard said: “The story is about desperation and what people will do to free themselves from addiction. I’d had the idea of an old woman asking a young man to do her a favor. As part of an online writing class, I developed the idea into the story… I wanted [it] to have somewhat of a gritty, noir feel to it. My challenge was to keep readers interested and include a nice twist at the end. I hope I’ve been successful.”

Praise for The Elixir

I loved this twisted short! Howard pulls you in immediately with Pauly’s overwhelming need…
—Diana Richie

Lee Allen Howard is a fantastic writer who creates realistic settings, believable characters, and high tension with only a few words. “The Elixir”… is so rich and vivid that I felt transported to Pauly’s reality and now desperately want to wash the grime off my hands.
—J.A. Sullivan