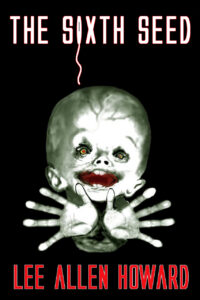 Believing a vasectomy will prevent another unplanned pregnancy, thirty-four-year-old Tom Furst—Melanie’s loving husband and the father of their five children—wants more than anything to dig them out of the fiscal hole they’re mired in and become financially secure. However, during the procedure, mysterious Dr. Prindar Krakhil secretly implants a worm-like alien seed in Tom’s vas deferens that not only ensures that Melanie gets pregnant, but plants in her womb a child half alien.

Their children are abducted. Melanie becomes gravely ill. When Tom loses his job, their home, and the sixth seed is born, will he accept the child for what it really is—and conquer the temptation to exchange it for the money Krakhil offers?

Praise for The Sixth Seed

“Lee Howard stitches together a story where the suspense never lets up.” –Ron Edison

“THE SIXTH SEED abducted my imagination and unsettled me with its pitch-perfect blend of science fiction, body horror and domestic terror. What a weird read!” –Michael A. Arnzen, Bram Stoker Award-winning author of Proverbs for Monsters

“Lee Allen Howard is an imaginative writer with slick, vivid prose and high octane pacing. He writes like no one else, and I mean this in a very good way.” –Trent Zelazny, author of Fractal Despondency

“Howard brings alien invasion up close and personal… buckle up for a thrill ride.” –Scott Nicholson, author of Liquid Fear

A fantastical fun read! If you like exploring the possibility of alternate life forms (i.e., aliens), this book is for you!  –Rebecca M. Pearsall

Tom Furst lay on his back on an examination table in Sterling Health Center, dreading the procedure he was about to undergo.

His mother-in-law had been delighted when he and Melanie were expecting their first child, happy with their second, concerned at their third, disappointed about their fourth, and disgusted when she deduced they were having a fifth. She cornered him alone in the kitchen of her suburban Pittsburgh home last Christmas before the family dinner.

“My Melanie is not a baby factory. Get fixed,” she said, snipping the poultry scissors at his crotch, “or I’ll fix you myself.”

Tom had always used condoms, unaware they weren’t entirely effective. The latest surprise compounded their financial pressures—they simply couldn’t afford any more children. So here he was, lying on an exam table, barely covered by a paper gown.

The door to the exam room clicked open, and a thin red-haired nurse stepped in.

Tom propped himself on his elbows and adjusted the blue paper over his groin.

“Dr. Lindquist was called away for an emergency. Another doctor is taking his place for the procedure. He’ll be with you in a moment.”

Before Tom could object, the nurse slipped out and shut the door. He swung his legs off the table and sat up.

It was bad enough that his healthcare plan forced him to use their medical facility, but when they switched doctors on him, they were going too far.

He considered dressing and rescheduling the procedure. But he had already arranged for time off work, announced the vasectomy to his mother-in-law, and shaved his crotch as Dr. Lindquist requested. No need to face all that again. Besides, if he left now he might never come back—the instruments on the rollaway cart were making him nervous.

He supposed one urologist was as good as another. Reluctantly, he lay back down.

The door opened, and a tall dark-complected man in a paper smock entered. He approached the table where Tom’s bare legs hung over. Tom leaned up on his elbows again.

“I apologize for the last-minute change.” The doctor’s swift speech flowed smoothly from behind the surgical mask. Over top of it, his eyes were two black marbles embedded in fading bruises.

“I am Dr. Prindar Krakhil. I will perform the procedure this morning.” Krakhil lifted the paper gown.

The doctor’s gaze darted about, and Tom grew uneasy. Had this guy never seen male organs before?

The nurse returned as Krakhil stepped to the sink. After washing and drying his hands, he plucked floppy examination gloves from a dispenser on a cabinet. He wriggled into them, snapping the milky material over his long, slender hands, which he finally flexed at arms’ length.

Krakhil rested his wrists on Tom’s knees. “We will start with a local anesthetic on the right side, make an incision, cauterize the right vas deferens, and then repeat the procedure on the left side. After that, I will suture the incisions.”

Krakhil folded back the gown. Tom flushed with embarrassment. Perhaps this was just another procedure for the doctor, but it was the utmost humiliation for Tom, especially with the nurse looking on. Yet, she was also a professional and had probably attended hundreds of vasectomies. If you’ve seen one guy’s bald junk, he supposed, you’ve seen them all.

Krakhil tore open an alcohol swatch. Tom spread his legs, resting his knees against the cold chrome stirrups. Krakhil scrubbed the cool patch in the crease of Tom’s thigh. The fierce antiseptic stung his shaved skin.

Krakhil reached for a hypodermic, poked the needle into a small glass bottle, and withdrew a measure of liquid. Holding the syringe before his dark eyes, he thumbed the plunger.

A few tiny drops arced from the needle, splattering Tom’s abdomen. A chill rushed through him.

“Just relax.” Krakhil’s voice was silken, but something about his manner disturbed Tom.

Krakhil sunk the needle into his groin.

Tom jerked, banging his knees against the stirrups. He gritted his teeth and gripped the table sides, silently praying for the searing pain to stop. His heart thrashed. Cold sweat formed on his forehead.

After a moment the doctor pulled the needle out and pressed gauze on the spot. “Sorry about that.”

Tom looked at the nurse. She was staring wide-eyed at Krakhil, her mouth ajar.

While Tom waited for the mercy of the anesthetic to manifest, the nurse pressed a rectangular gray patch onto his left side. An insulated wire connected it to the table.

“This grounds you for the cauterization,” she said. Her eyes were a creamy blue, the color of the star sapphire on her neck chain.

Krakhil busily swabbed Tom’s privates with Betadine. The feeling faded away. When the doctor finished, he reached a gloved hand between Tom’s legs. “Can you feel this?”

“No,” Tom said, wondering what the doctor was doing. Wringing his scrotum like a dishrag? On second thought, he didn’t want to know.

“I will make the first incision.”

Tom laid his head on the padded rest and willed his legs to stop trembling.

Leaning forward, the doctor stared intently below the rumple of paper gown over Tom’s stomach.

He poised the scalpel for the first cut.