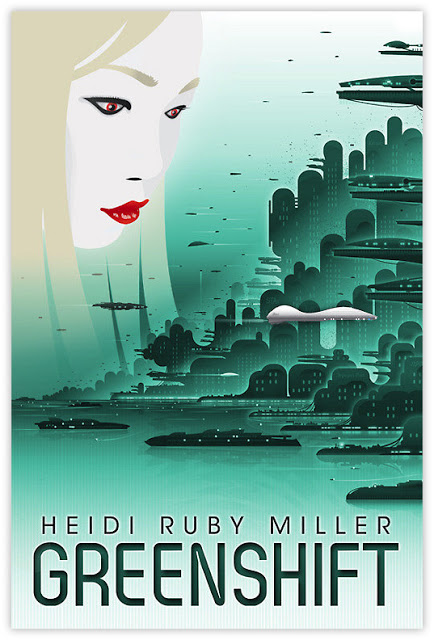 You can find out more about Heidi’s books and follow her author interview series at http://heidirubymiller.blogspot.com.

Do you wish you could write more? Guest blogger, Heidi Ruby Miller, author of AMBASADORA and GREENSHIFT, reveals how she increased her daily word count. Keep reading for a chance to win a copy. You’ll want to, because her spicy sci-fi romances rock with action!

I resolved this year to WRITE FIRST.

It was my way of seeing if I could write more. And it worked.

Believe me, I was more surprised than anyone. Over the past five years I had steadily worked out of the century club (100 words per day) to the millennium club (1000 words per day), but then I stalled. I have always been a slow writer, probably because I labor over every word and character motivation, each plot point, the cadence of individual sentences, blah blah blah.

Outlining helped me tremendously once I started graduate school. The planner that I am, I usually had a nice beginning/middle/end worked out, then went from there. When I began to do more extensive outlines (80 pages long), which detailed each scene, I had a rough first draft in no time and a direction to move with the story. That’s when the 1000 words a day came quite easily.

To jump to the next level (like Robert J. Sawyer with his 2000 words a day or Susan Mallery with her 20 pages a day) I needed a little extra mojo. Turns out the solution was simple—write first.

I decided to try my new tactic in 2012 after talking with horror writer and my co-editor of MANY GENRES, ONE CRAFT, Michael A. Arnzen. Instead of New Year’s resolutions, he does focus words—words that he focuses on all year in order to make improvements in his life and career. My words were WRITE MORE, but that seemed too broad, so I decided upon WRITE FIRST.

And that’s what I’ve been doing since January 1. I wake up half an hour early to… work through a yoga routine.

Okay, I know you were expecting me to say “write,” but with as much time as I spend on the computer, I wouldn’t be able to move if I didn’t stretch and breathe first thing in the morning. But then I write. Before I change out of my pajamas or make a cup of tea or surf through all my social media sites or before my husband gets out of bed, I sit down and write for at least 30 minutes. That may not seem like much time, but it’s enough to get a few hundred words in or a few pages revised. More importantly, it brings my story front and center in my mind where it stays all day long.

It becomes a trance-like state for me during the rest of the day. No matter what I’m doing, I’m thinking about my characters, plotting scenes in my head. This compels me to sit back down in front of the laptop and keep writing. Before I know it, I’ve sometimes had 3000 words by day’s end or revised four chapters. More typically, I hit 2000 words, but that’s double what I was doing last year at this time.

Granted, I accrue this word count during various sessions throughout the day, not in one sitting—I would have a constant migraine if that were the case. But it’s working. January 2012 was my most productive month ever. So far February is falling a little shorter with only an average of 1500 words per day, but that’s still 500 more than most days last year. I blame the small lapse on the launch for my latest novel GREENSHIFT, which came out on Valentine’s Day. Obviously, more marketing time was required this month. I fully expect my productivity to kick into overdrive in March… by simply writing first.

Be entered to win a copy of GREENSHIFT or AMBASADORA or both by telling us in comments what you’re reading right now and leave your email address disguised something like heidirubymiller AT gmail. Winners will be drawn randomly on March 1, 2012, and announced on March 2, 2012. Good luck!

Heidi Ruby Miller has been putting too much sex in her Science Fiction since 2005 because she believes the relationship is as important as the adventure. She loves high-heeled shoes, action movies, Chanel, loud music, and video games.

Heidi also teaches creative writing at Seton Hill University, where she graduated from their renowned Writing Popular Fiction Graduate Program the same month she appeared on Who Wants to Be a Millionaire. The writing guide MANY GENRES, ONE CRAFT, which she co-edited with Michael A. Arnzen, is based on the Seton Hill program and her novel AMBASADORA was her thesis there. Another tale in the Ambasadora-verse, GREENSHIFT, was just released this month.

She lives near Pittsburgh with her writer husband, Jason Jack Miller.

You can find out more about her books and read her author interview series at http://heidirubymiller.blogspot.com.